I Learned about Leading from: That Rock Star

In 2006, I was lucky enough to take a battlegroup to train in Canada.  It was a month-long field exercise and we were to spend about 12 days involved in a Tactical Engagement Simulation Exercise (or TESEX).  This is a live training event using lasers to simulate weapons effects and allows participants to play out their plans and practice their tactics, techniques and procedures in an adversarial setting.  Think of the biggest game of LaserQuest that you can imagine and you won’t be far off the mark!

Just before the exercise started, I explained to all of the team leaders what it was I wanted us to achieve, how we were to approach the exercise, and what particular characteristics and behaviours we should seek to develop in ourselves and our own teams. This was particularly important to me because we were due to deploy on operations within 4 months of this exercise ending. Amongst the things I listed were; mission focus, operating with clarity in chaotic situations, risk awareness, avoiding risk aversion, and having the determination to overcome obstacles, setbacks and challenges.  I then announced rather lightheartedly that we would declare the individual within the battlegroup who had best demonstrated the characteristics that we sought to be the “Battlegroup ‘Rock Star’”.  There was no long and involved nomination process, just a short verbal brief of who in their team deserved to recognition and why and we decided there and then.

We fought five mock battles and after each battle duly identified the member of the battlegroup who had displayed such determination, indomitable spirit, initiative and commitment.  Their name was announced to the leadership team with an instruction to inform their teams after each of the After Action Reviews and we then moved onto the next battle.  I thought nothing more of it. 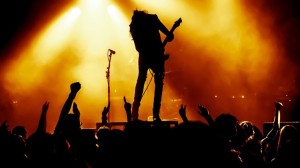 One of the recipients was a very popular and likeable soldier nicknamed Bagpuss, who had just kept on going and going in the face of all sorts of obstacles and was absolutely physically spent at the end of that particular mock battle.  Some five days later, at the end of the whole exercise, the Regimental Sergeant Major told me; “Bagpuss and his mates are absolutely over the moon that he was named as the Rock Star.”  We decided there and then to make more of the award than we had originally intended and got certificates made for each of the five, had them framed and then got the 650 men and women of the battlegroup on parade and presented the awards in front of them.

I learned again, that day, the importance of recognition, reward and rituals.  Naming a ‘Rock Star’ started out as a bit of fun but it soon became clear that it was a great vehicle through which we could celebrate and encourage the behaviours that we wanted to see. It allowed me to set the tone for the future and the parade gave me an opportunity to reinforce that message before we went on operations. It was a powerful source of motivation and a way to say thank you, and the recipients looked as if they felt 10 feet tall. It worked because their performance had truly earned it and our recognition was authentic and genuine.

In “Leading”, Sir Alex Ferguson stated that the two most powerful words in his armoury were “Well done”.  The Rock Star was exactly that, a public and genuine demonstrable “Well done”.  From then on, I always promoted people in front of their peers, ensured that all successes were celebrated and celebrated publicly and it became a ritual.

How much time do you spend identifying and then celebrating your ‘Rock Star’s’? Enough?

After all, iT’S Leadership!!