What stops you from being a team? Your Smartphone habits?

I support Stoke City Football Club and I must admit it has been a challenging ride for the past 12 months.  We seemed to lose our direction, were rather shambolic on more than one occasion and appeared to lack heart and togetherness.  The run of poor results led to a change of manager and suddenly the mood has changed.  During their 2-0 win over Huddersfield last weekend, the team ran hard, tried things and seemed to be more determined.  This morning, Sky Sports ran a short piece on the Paul Lambert’s return to Premier League management and visited him at the club’s training ground.  One of the instructions he has given is that all squad members will eat together after training and that there will be no mobile phones in the dining room.  The aim is to encourage the players to use the time to reflect on the sessions that they have just had and to get to know each other.

I was delighted to hear that because in so doing, he is addressing two of the things that are, in my opinion, the biggest impediments to team development and team working that exist in this modern world and I see them at play with almost every team that we coach.  The first is making time for each other.  Almost without fail, leadership teams that we talk to complain that it is difficult to find diary space to meet and that when they do arrange to meet, it is the first thing that they cut from the diary as pressure mounts.  More of that another time. 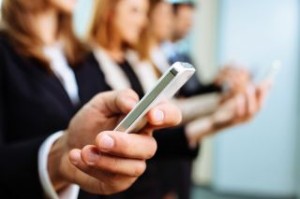 Far more damaging is how they act when they do get together and I have seen this trait in off-sites, team meetings, meals out and around the coffee point.  Almost without fail, when somebody is speaking, there is at least one team member looking at their smartphones.  Some do so openly and others kid themselves by placing the phone on the desk and then spend the whole day glancing at it every time an alert is displayed.  I would like to think that we would all agree that this is impolite at the very least but I’m not sure that we would because that behaviour seems to be so widespread and ingrained.

So let’s think about the messages that we could be sending when we act like this.  The first thing that we are saying is “I’m not interested in what you are saying.  The other stuff going on in my world is far more interesting than you”  If we have just spoken before, and then we dive into our phone, we could be interpreted as saying  “My position is right, your opinion doesn’t matter.” If we keep glancing at our 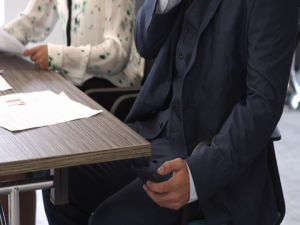 phone they might feel we are yelling “Hurry up, I’m pretending to be interested but my world is more important” and most of all we risk giving the message: “I’m not really a member of this team.  My inward-looking world is more important.”  Most of these behaviours, whether we mean it or not, scream – “I don’t really respect you!”  Not many of those statements, nor the associated behaviours of not listening, demonstrating self-interest over the collective purpose, and being closed to other ideas are found in the list of characteristics of high performing teams. On the other hand, real listening, being open to others, being respectful and aligning with a collective purpose are the essence of true teamwork and high performance follows.

So, my challenge to you is to…

PUT THE PHONE AWAY!

When you are in team meetings and one-to-one discussions and, if you see the phones distracting others, call it out; tell the other person how it makes you feel.  You will get so much more from those meetings if you do.  And remember, the example which others follow is almost always set by the team leader.

After all, iTS Leadership.