I learned about leading from: That Train Journey! 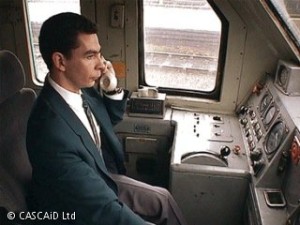 Something happened to me last week that, to my recollection, has never happened in my life before!  I was on an early morning train in to London and we were on the last couple miles of the journey, when the train came to a halt away from any station and the driver made the following announcement: “excuse me ladies and gentlemen, it appears we have been directed the wrong way and have been heading up the wrong track!  I am going to have to come through the train and get to the other end so that I can drive it back a couple of junctions and then head back on the right track.  Sorry for any inconvenience.”

The reaction in the train was very varied and quite fascinating to watch.  Some smiled and happily got on listening to their music, reading their paper or book, or watching their downloads on various sizes of digital screens.  Others sighed and tutted, looked at their watches several times, moaned to their mates and strangers, got redder in the face and clearly started stressing about something which was totally out of their control.

The next thing that happened was the drivers’ journey from one end of the train to the other.  Not usually a difficult path to tread, but this morning the usual 12 carriage train had been reduced to just 4 carriages.  As such, the train was packed.  Everywhere.  There really wasn’t a pathway to walk through, so everyone had to squeeze and jostle and cuddle up to strangers to allow the driver to get to the other end.  Of course, once he had driven the train backwards a couple of junctions, he then had to retrace his steps through the crowds, and although the mistake was not his fault, this did feel somewhat of a very public humiliation!

Anyway, all this got me thinking…..how often, as leaders, does this happen to us?  I don’t know of one plan that has gone exactly the way it was written or intended, but that doesn’t mean we shouldn’t plan!  How often have we “been directed down the wrong track”?  …and when that happens, how quickly have we “stopped the train”, “announced the mistake” to others on our journey, and then walked through the team to explain what has happened and then “go back a few junctions” and start again?  As a leader I’m not too sure that I have always taken this course of action to be honest.  I have been more likely to try to save face and find the reason why the “track” I was now on was the right one and then tried to make that work.  Looking back, I can see that the better, perhaps more personally challenging option, may have been to retrace steps and “start again”.  I can see today, with hindsight, that such authenticity and humility could actually have been a strength and more likely to gel the team together.  Mistakes happen, they are often our best form of learning, but we have to be honest with the current situation and open to discuss and extract the learning, free from blame and recrimination.

….after all, iTS Leadership!

Get in touch with us today and take the first steps to transforming you business.