I learned about leading from: Those NAAFI breaks

I vividly recall that many years ago, I was allowed to accompany my father to work.  It was a time when we had a different attitude towards risk assessments, liability, litigation and common sense and after being shown around the vehicle park, I was dropped off with one of the Plant Operators and allowed to climb on, over and generally explore how several JCB’s and other mechanical plant vehicles worked – this included driving them around the car park and so on.  I also clearly remember how at 9.55am, I was told to park the vehicle, turn it off because “It’s NAAFI break at 10am.”  The NAAFI was the Navy, Army, Air Force Institute established in 1921 to provide canteens and recreational support to the Forces and during the Second World War had over 7,000 canteens across the world providing a not for profit service to servicemen and women.  Although it changed over time, it became synonymous amongst other things with the provision of a canteen and tea and cakes and NAAFI became shorthand for all things associated with a tea break.

My instructor and I then strode purposefully to the canteen area and I was handed a mug of tea and invited to sit on one of the many sofas and comfy chairs that were arranged in circles around the room and for the next 30 minutes the room was full of talking, laughter, reminders, catch-ups and tales of what had gone before.

Wind forward some 15 years or so and I joined my Regiment to discover that every day had a NAAFI break programmed.  The Officers would go to their Mess for coffee, the Warrant Officers, Colour Sergeants and Sergeants would go to their Mess for tea and toast, and the remainder of the Battalion would go to their Company clubs or the NAAFI building for whatever took their fancy (a brew or can of pop and something to eat (sweet or otherwise)).  Even if we were on the vehicle park and too far away from the Messes to go, we would down tools, stop work for half an hour and have a brew together whenever the mobile shop (known as the NAAFI wagon) came around.

Everywhere that I have worked since, we have tried to ensure that we have a daily NAAFI break.  When, I was lucky enough to command my Regiment, my Regimental Sergeant Major would come in to the office at about 9.50am and ask me if I was going for coffee.  It was a rather loaded question and his expectation that I should was clear.  We even managed to stop for tea when on operations, including when we were living out of our vehicles in the desert.

So, why am I telling you about how many brews I have drunk over my lifetime (and it is a lot)?  Because those NAAFI breaks were a fantastic blend of so many things that Dan Coyle highlights as key to the culture that underpins high performing teams:  it allows “collisions” (defined as serendipitous personal encounters) to take place, it enables back-channel and side channel conversations, it enables high levels of mixing (the senior and junior members of a various departments meet very regularly), people sit in circles, pouring and collecting drinks enable small attentive courtesies, allows for close physical proximity, unstructured agenda free conversations, and so on, and without realising its power, we had institutionalised it.  I genuinely believe that when we have all been “too busy” to give up the 30 – 40 minutes that it takes, we have suffered, we have been less situationally aware, taken longer to do stuff because it has taken e-mails or conferences to address issues, and above all, have been less connected. 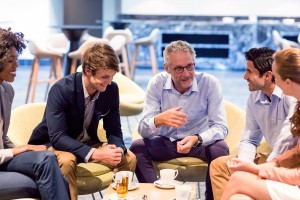 So, I challenge you, I dare you even!  If only just for a week to see what happens, get your team together for a NAAFI break!  Have regular collision breaks and get the team involved but don’t turn them into agenda led meetings over a coffee, just let them flow, – it’s much more productive and much better for the team than trying to connect by conference call and e-mail alone. I recognise that it can be difficult in these times of remote working, flexible hours and geographically spread teams but all of these excuses and “obstacles” are exactly why we need to do it.

Remember, leaders look after the health of their team, so you are the people who can make it happen. Do it and you will enjoy profit and smiles. After all, iTS Leadership.