I learned about leading from: that Bale’s post-match comments

What a Champions League final Gareth Bale had.  He scored an amazing goal to open, quickly followed it with a second, had an incredible impact, and earned his 4th Champions League Winners medal.  What followed were wonderful comments and accolades from all commentators, he found himself in the centre of the spotlight on the biggest stage, and yet Gareth Bale states almost immediately after the game that he would be having talks with his agent about his future and since then the sports press has been filled with articles about him moving back to the Premier League or to the Bundesliga in Germany.  This is clearly not about hygiene factors such as money, it appears to be about his desire to play.

It would seem that in spite of everything that Gareth Bale has at Real Madrid, his deepest and central motivation, playing as much football as he can is not being met and he is prepared to move elsewhere to find it.  Now, let’s be honest, Gareth Bale exercises his freedom to choose from a position of security that many of us will never know and he is hardly likely to find himself without any suitors but his comments did get me thinking about leaders looking after their team and their team members. 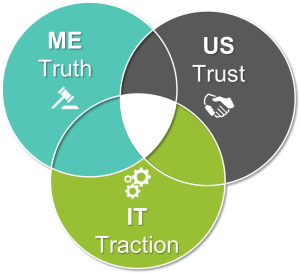 As you know, we at iTS-Leadership Ltd emphasise the importance of understanding and then balancing the relationship between Me (the individual), Us (the Team) and It (the culture, vision and outputs).  It is represented as a Venn diagram and if you have everything in balance, you find yourself in the sweet spot in the centre and all will run effortlessly.  It is not about pandering to egos (that takes you too far into the Me circle) nor is it being too task focused (as that drags you into the ‘It’ circle) and nor is it over emphasising the team element.  It is about balance.  There will be times when you have to be task focused, or, you have to ask an individual to “take one for the team” and so on – that is what you as a leader must do but, and here is the trick, it is important that you recognise when you are always asking them to take one for the team, or, always pandering to their individual needs, the relationship gets out of balance. You overinvest in one circle by overdrawing in the others and if you do restore the credit balance in those that you have ignored (possibly for good reason) then your organisation loses its shape and performance dips or your best players leave.

By leaving Bale on the bench for the past few weeks and especially at the start of this Champions League Final, Zidane has overdrawn on Bale’s Me account to feed the Us account to such an extent that Bale believes that the balance will not be restored.  As leaders, we need to remain aware of where we are spending our Me, Us and It credits and continually restore the balance. So, stop your best players from talking to their agents by balancing the three occasionally competing but always complementary demands. After all, iTS Leadership.